You Should be here for Amazing places in Bali !

Feel free to choose whether Tours or Activities based on your references!

WE GIVE YOU MORE

WE ONLY DO BETTER !
THE WEST TRIPS OF BALI 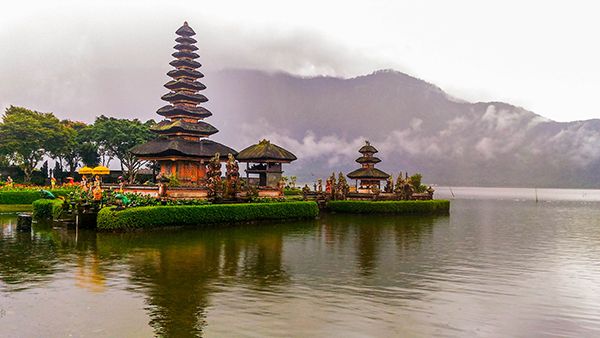 Ulun Danu Temple is a major Shaivite water temple on Bali, Indonesia. The temple complex is located on the shores of Lake Bratan, Bedugul. Water temples serve the entire region in the outflow area; downstream there are many smaller water temples that are specific to each irrigation association. This Temple is one among the best known Balinese Hindu temples and the most photographed tourist attractions in Bali island.

An amazing and most famous for its landscapes that are both dramatic and truly exotic. With the cool highlands and the breathtaking scenery of this village at the foot of Mount Batukaru makes for wonderful photo opportunities, and serves as a soothing retreat away from the island’s crowded south.

Taman Ayun Temple is a compound of Balinese temple and garden with water features located in Mengwi district in Badung. Badung regency and about 18 Km north side of Denpasar town. It is strategically located beside of major roadway between Denpasar to Singaraja.

It is set on the land which is surrounded by the big fish pond and look like a drift on the water. It owns the beautiful temple building with multi storied roof and Balinese Architecture. The wide beautiful landscape garden in front courtyard to welcome all visitors who come and visit this temple. It is a beautiful and the most popular for vacation in Bali. Tanah Lot Temple is one of Bali’s most important landmarks, famed for its unique offshore setting and sunset backdrops. An ancient Hindu shrine perched on top of an outcrop amidst constantly crashing waves; Tanah Lot Temple is simply among Bali’s not-to-be-missed icons.

The onshore site is dotted with smaller shrines alongside visitors’ leisure facility a cultural park presenting regular dance performances during the ceremony. The temple is located in the Beraban village of the Tabanan regency, an approximate 20km northwest of Kuta, and is included on most tours to Bali’s western and central regions

Pura Besakih is a temple complex in the village of Besakih on the slopes of Mount Agung in eastern Bali, Indonesia. It is the most important, the largest and holiest temple of Hindu religion in Bali, and one of a series of Balinese temples.

In Bali, many temples and their meaning cannot be separated from the land they are built on, the nature and the spirits and gods they believe do actually live there.
The priests let us know that during the 8th century, a Hindu monk had revelations to build homes on this holy ground. They say during the process, apparently many of his followers died due to illness and even accidents. Stories like this are the brick-stones of legends so it is difficult to get the historic truth. The people called the area “Basuki”. A name referring to “Naga Besukian”, a dragon deity inhabiting Mount Agung. 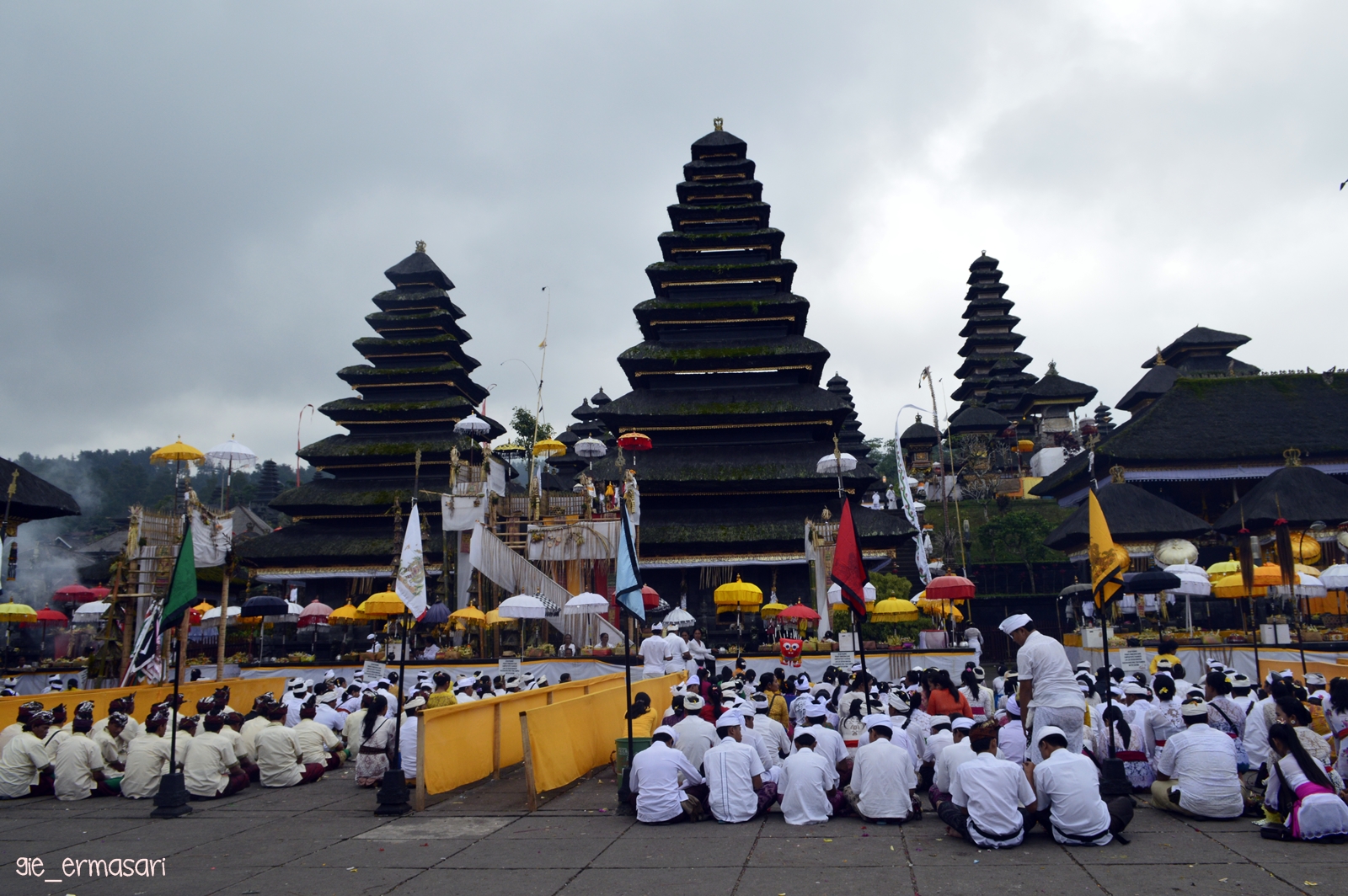 Besakih was hit a few times by earthquakes (e.g. 1917) and also several volcanic eruptions of Mount Agung took their toll, particularly a major one in 1963. The complex did get damaged here and there but in 1963 the the lava flow did pass sparing the temple from complete destruction. This event is now of course part of the overall legend of Besakih Temple. The people believe that the deities showed their true power but without destroying the holy temple completely.
Besakih being the biggest and holiest of the island’s temples plays a significant role not only for the villages and families nearby but for entire Bali. Many important festivals are celebrated here. It is a temple open to every devotee – from any caste groups. It is simply the prime spiritual center for all Balinese. Puri Agung Semarapura, is a historical building complex situated in Semarapura, klungkung Regency, on Bali, Indonesia. The palace (Puri) was erected at the end of the 17th century. Today the basic remains of the palace are the court of justice, the Kerta Gosa Pavilion, and the main gate that bears the date Saka 1622 (AD 1700). Within the old palace compound is also a floating pavilion, the Bale Kambang. The descendants of the rajas that once ruled Klungkung today live in Puri Agung, a residence to the west of the old palace, which was built after 1929s.

Besides, the Puppet painting also tells the law of Karma Pahala. The law of cause and effect of good man’s bad deed done during life. And Puppet painting also depicts the reincarnation of man to the world to atone for the sins of his deeds (reincarnation). In addition to these two buildings, in the area attractions Kertha Gosa, precisely in the western area, there is a museum that is also crowded with tourists. This museum holds historic objects of Klungkung royal heritage, and objects used by traditional Balinese traditional courts in the past.

Bat Cave Temple is one of Bali’s most important temples. It features a complex built around a cave opening that is inhabited by hordes of bats, and its name translates to ‘Bat Cave’. This temple was established in the 11th century by Mpu Kuturan, one of early priests who laid the foundations of Hinduism on the island.

As the name implies, Bat Cave Temple is inhabited by thousands of bats in black gray. During pre-Hindu times, indigenous peoples believe this cave is connected by a long passage to Cave  Temple in Besakih, which is about 35 km away, and they also believe the legendary dragon snake, Naga Basuki, is tuning the aisle. Dragon Basuki is believed to be a stalwart of the balance of the world. In ancient times Bat Cave Temple also used as a testing ground for people who are known to violate the law under the Kingdom of God Maheswara.

Bat Cave Temple is used to worship the god Maheswara, who is believed to live in one part of this island. Various ritual ceremonies are held in this temple every day, although most relate to the ritual of death. Bat Cave Temple is located on the edge of the main road, and opposite the clear beach facing the vast sea, still remains an attractive place for tourists visiting Bali, especially for those who are on the way to Besakih Temple.

Barong is a lion-like creature and character in the mythology of Bali, Indonesia. He is the king of the spirits, leader of the hosts of good, and enemy of Rangda, the demon queen and mother of all spirit guarders in the mythological traditions of Bali. The battle between Barong and Rangda is featured in Barong dance to represent the eternal battle between good and evil. 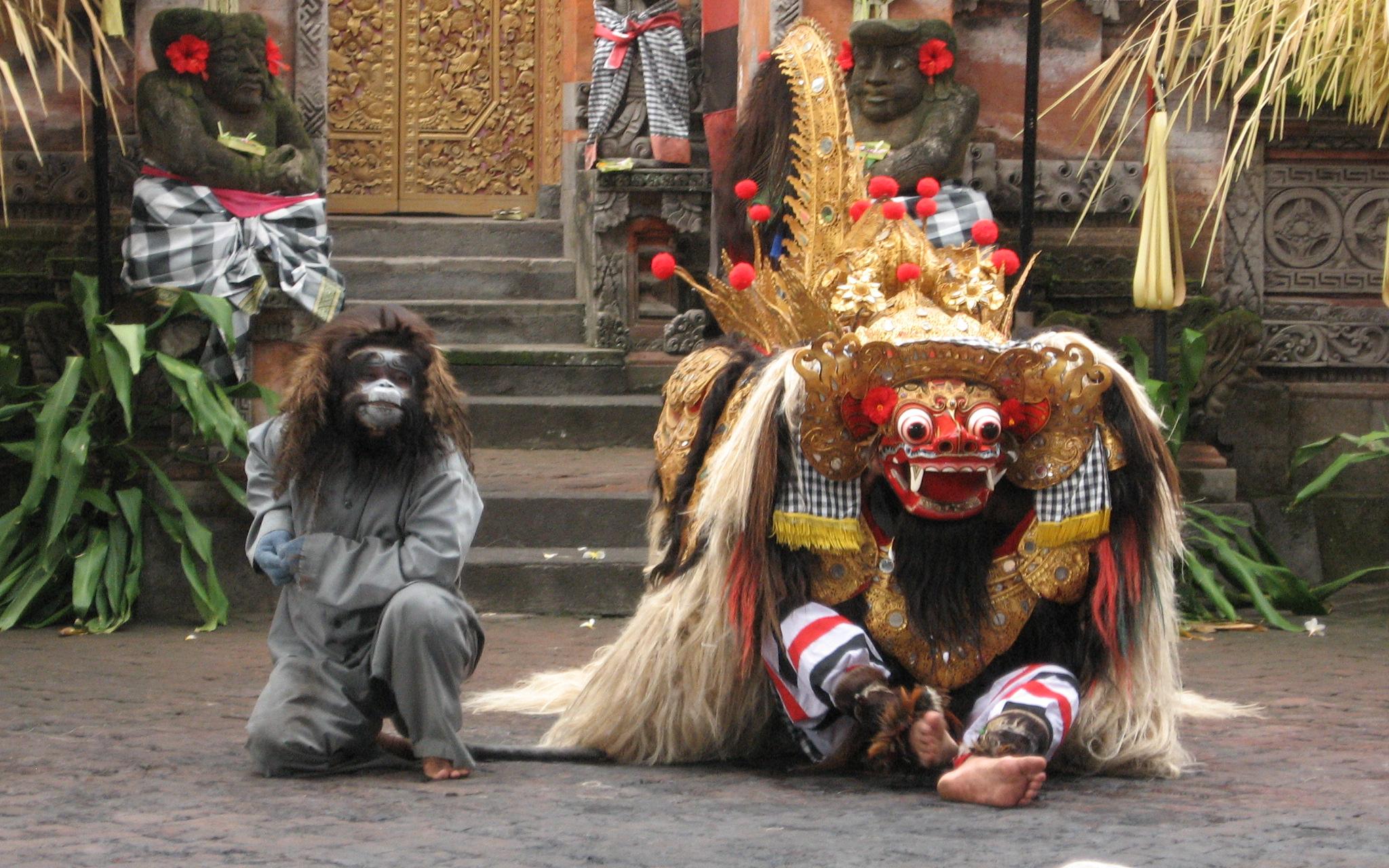 Barong is portrayed as a lion with red head, covered in white thick fur, and wearing gilded jewelry adorned with pieces of mirrors. The shape of lion Barong is somewhat similar to a pakingese dog. The origins of the Barong are far a back in time and quite uncertain. Its origins could be from animis worship, before Hinduism appeared, when villagers still believed in the supernatural protective power of animals.

Elephant Cave Temple is located on the island of Bali near Ubud. It Built in the 9th century, it served as a sanctuary. Goa Gajah is named after Sungai Petanu (Elephant River) and dates back to the 11th Century. Originally the temple was a dwelling for Hindu priests. The main highlights of this temple are the short cave with the massive carved face entrance and the holy pools. Visitors will go into the cave, spending several minutes in the darkness checking out the Shiva ling-um at the end, before exiting to take holy water

Kintamani is a village on the western edge of the larger caldera wall of Gunung Batur  in Bali, Indonesia. It is on the same north-south road as Penelokan and has been used as a stopping place to view the Gunung Batur region.  Furthermore, it is the most favorite tourist destinations in Bali with the majesty of mount Batur as well as beautiful lake. It is surrounded by the captivating nature and there are six ancient villages around cauldron of Batur Lake which is often conceived by Bali Age Village. The local people from these villages own the unique cultures, houses as well as life style. Kintamani Area is consisted of some Villages such as Kedisan Village, Buahan, Abang, Trunyan, Songan, South Batur, Middle Batur, North Batur, Sukawana and Kintamani Village.

Tegalalang is one of the famous tourist objects in Bali situated in Tegalalang Village north of Ubud Bali  featured by the amazing rice terrace set the cliff. Tegalalang Village is located on 600 m above sea levels covered by good temperature where most of the villagers as a farmer. The visitors who visit this village will discover the beautiful green rice terrace on the cliff bank and understanding how does the local farmer work on it hardly to make rice. It is a beautiful site that you must go and visit directly and you will be in real Balinese Nature.

Lay on the beach for sun bathing

Special for fresh seafood dinner in Jimbaran with sound of waves or sunset backdrop !

is a ± 60 ha area of cultural park located in Ungasan, Badung Regency or about 10-15 minutes driving from Bali’s Ngurah Rai International Airport. With a future plan of ±120-meters tall and 64-meters width statue of Garuda Wisnu as its main attraction.

An epic trip into a reality for people of all ages at GWK ‘Cultural Park’. A view of a breathtaking monument, classic attractions, fantasy experience and modern technology blends in and transpire as you explore of unique cultural park and it is one of the world’s largest monuments, one-stop tourist spot with beautiful panoramic view.

Uluwatu Temple is  believed to be Bali’s spiritual pillar, is renowned for its magnificent location, perched on top of a steep cliff approximately 70 meters above sea level. This temple also shares the splendid sunset backdrops.

Pura Luhur Uluwatu is definitely one of the top places on the island to go to for sunset delights, with direct views overlooking the beautiful Indian Ocean and daily Kecak dance performances. Balinese architecture, traditionally-designed gateways, and ancient sculptures add to Uluwatu Temple’s appeal.

The Balinese Hindus believe that the three divine powers of Brahma, Vishnu, and Siva become one here. It belief results in making Uluwatu Temple a place of worship of Siva Rudra, the Balinese Hindu deity of all elements and aspects of life in the universe. Pura Uluwatu is also dedicated to protect Bali from evil sea spirits

Let’s explore the experiences of real Balinese culture whether Tours or Activities based on your preferences !

We are ready to provide a PRIVATE CAR complete with a friendly Driver.

Up to 10 people we give best deal!

We have lot of gorgeous panoramas in Bali; get your a memorable experience with us!